Facts with Kulqee: Secrets To Making A Quality Song 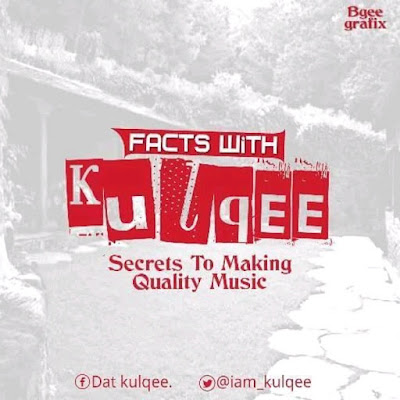 It’s a new week and am back with a new article to help you in your career development. Most Up and coming artistes make several mistakes when producing or making their contents. But before I list out ways to enable us to have a great musical material, let me clarify the idea that this article is aimed at helping one produce a legendary and recommendable song and not a hit song. Though the quality of a material has a role to play in making a song a hit single, promotion is the foundation. That being stated, let’s consider these few facts…

1. Change Your Mindset Most Up and coming stars are inexperienced when it comes to music production and sound engineering. They believe it’s the work of the producers and sound engineers and not theirs. But the truth of the matter is, the producer and sound engineers are pre-paid (that’s they are paid before they work or before the material succeeds or fails) but you’re not. Thus, your success depends so much on the success of the material unlike that of the producers and sound engineers.
Secondly, it is your work, not theirs. A contractor or project manager is accountable for every single error found in the project he is managing irrespective of who he called to work for him. Thus ensure you have a knowledge about production and ensure your producers reproduce the sounds you had in mind when composing your songs. Don’t settle for less.

2. Get Acquainted With the Beat
Many Up and Coming artists produce wack materials all because they fail to listen to these beat over and over again before recording. Note, the more you listen to a beat, the more acquainted you get and the better your recording.

When next you go to the studio to make a song, after the producer is done producing the beat, pay him and take the instrumental home. Play it over and over again until you can marry it with your lyrics and also be conversant with all sounds on the beat. The more sounds you memorize on the beat, the better chance you stand in making a quality music. Music is a spirit, and until your spirit agrees with the beat, you can produce another spirit or pass across your message properly as expected.

3. Don’t Let Your Sound Engineers Boss You
Yes, don’t let them boss you. You can’t send your materials to sound engineers and sit at home while they do the job. You got to be there. The same way you have and lay for studio sessions while recording or producing is the same way you should have sound engineering studio sessions.
Being there when your songs are mixed and mastered enables you to ensure your ideas about your material are delivered. Let the sound engineer only add or remove sounds you two agree should be removed or added. Take control and ensure you treat your song as your work.

Remember, your whole career could shut down when there is a mistake in any of your materials. Always be sure your brand is highly protected.

“The Digital Church Book”: Media Personality Prince Oluwatosin Provides Solutions to How Faith-Based Organizations Can Leverage on The Internet

Mr. Plus - April 30, 2020 0
Worship leader Boluwaduro dishes out a brand new music in the form of a new worship anthem "Your Name," off her forthcoming project.Not new...