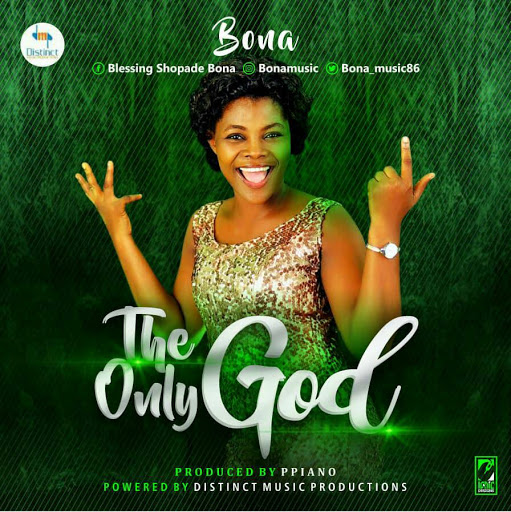 The Only God” is an inspiration from the Holyspirit. Its about how Big and Powerful our God is than any other creature. It talks about Gods Love, Mercy and Kindness towards Humanity.
Blessing shopade aka BONA hails from Ogun State, Nigeria, She studied Business Administration at UNILAG. Blessing started her music career from secondary school and her debut single “I hail o” came out in 2013 which she featured Mike Abdul of midnight crew.
and second single “Baba o Ese” dropped 2016.
She’s also the founder of “Bona Music Band”.
Bona has shared the same stage with the Top Gospel Artist. She’s a lady filled with the power of the Holyghost with an Angelic voice. She’s the winner of Distinct Music Productions at 10 music, a spirit filled and powerful song that carries God’s anointing. It was beautifully produced by Adeniji Peter Ppiano &amp;
Powered by Distinct Music Productions
DOWNLOAD MP3
Follow Bona on socials for more updates
IG-@bonamusic
Twitter-@bona_music86
Facebook- Blessing Shopade Bona.
IG/Facebook
@distinctmusicproductions

Mr. Plus - August 24, 2018 0
Gospel Singer, Rapper and Songwriter “ Corban ” best known as “Corban sabiboy” signed under Christed Records is back with another Hit single titled...

Mr. Plus - December 6, 2018 0
Energetic singer and songwriter wow with his second single "Fresh Fire," a sound of revival and restoration. The Dynamic praise/worship leader Blessed Amiolemen came into prominence...