The Lagos State Government on Wednesday (1st May,2019) launched the new buses under the Bus Reform Initiative (BRI) with free service on five routes, assuring that the development would redefine public transportation and make the State globally competitive.

Specifically, the free service was launched across five routes, which includes Berger to Tafawa Balewa Square (TBS), Berger to Oshodi, Oshodi to TBS, Ikeja to Alausa and Ikeja to Oshodi to commemorate the Workers Days, after which normal service will kick start on May 2, 2019.

Speaking at Ikeja Bus Terminal, one of the modern terminals constructed as part of the BRI, an official of the Lagos Bus Services Limited, the operator of the buses, Mr Timi Olajide said it was a good thing that the buses have now been finally launched for the use of the people.

He said out of the 5,000 buses planned for the initiative, the government was launching the scheme with 820 high and medium capacity buses, adding that aside the intelligent transport system component of the initiative which will aid Lagosians to plan their journeys, comfort and safety of the people have also been factored into the whole process.

“In each of the buses, we have six emergency exits and First Aid Box, while every seat has a dedicated USB port for charging of phones, free Wi-fi, television and CCTV cameras which are linked to our control centre to monitor everything going on in the buses, among other features.

“We have also taken the issue of people with disabilities specially and there are seats reserved for them in the buses,” Olajide said.

At the Oshodi Transport Interchange, a cross-section of Lagos residents who enjoyed the free service, lauded the State Government especially Governor Akinwunmi Ambode for the buses and the infrastructure provided to support the transport reforms, saying the development was commendable. 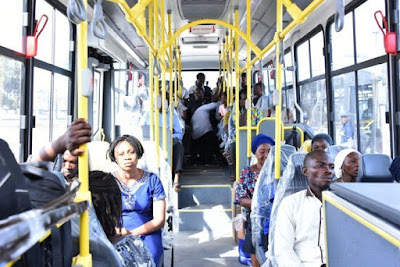 A resident, Adewusi Oluwatobi Emmanuel said: “I am very happy to enter this bus today because it is a thing of joy that something like this can happen in Nigeria. I am happy that I can enter a beautiful bus with free Wi-Fi, free USB port, free air-conditioning and so on.

“With this, I know that this country is going to greater heights. One thing I believe we should do is to work together, love ourselves and before we know it, Nigeria will be one of the best countries in the world.”

Another resident, Mr Demola Aleshinloye, said: “This is a lovely idea. I like this development and I want it to be sustained. God bless Nigeria.”

Mr. Plus - October 26, 2018 0
After the release of - 'Winner Man' audio featuring evergreen Gospel minister - Kenny K'ore a while back, with the song receiving massive reviews,...

MUSIC: Lara Alabi – Here I Am