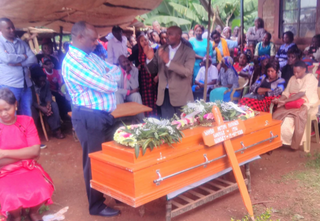 There was drama as local  pastors refused to officiate at the burials of an 82-year-old granny gangster Wangari Muturi Karanja and her 26-year-old nephew Sammy Mwangi Kang’ethe on friday 27th july 2018 , in Irewa village, Kiharu, Muranga County in Kenya.

Karanja, Kang’ethe and another man from Njumbi village in Mathioya constituency had been shot dead when armed police stormed the grandma’s home in search of a victim, Margaret Waitherero from Samar village in Maragua who had been kidnapped by her gang.

It was learnt the pastors who officiated the burials came all the way from Kayole in Nairobi and in Naivasha.

An AK 47 assault rifle, a homemade gun and several bullets were recovered from the grandmother’s home during the raid.

The kidnappers had demanded ransom from Waitherero’s family before they could release her, with police sources confirming that the woman’s husband had sent part of the ransom.

Mr. Plus - June 12, 2018 0
Audio: Femi Micah – Reign In This Place | @femicah US Based gospel music minister and songwriter  Femi Micah drops a music project that...