A US pastor detained in Turkey for almost two years is to leave prison and move to house arrest until his trial, a court has ruled. 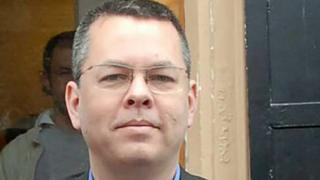 Turkey on Wednesday moved from jail to house arrest an American pastor who has spent almost two years imprisoned on terror-related charges, in a controversial case that has ratcheted up tensions with the United States.

Andrew Brunson, who ran a protestant church in the Aegean city of Izmir, was first detained in October 2016 and had remained in prison in Turkey ever since.

Mr Brunon has lived in Turkey for 23 years and worked as a Protestant pastor at the Izmir Resurrection Church.

He became one of more than 50,000 people arrested as part of President Erdogan’s huge crackdown following the coup attempt

Prosecutors say Mr Brunson worked with a group led by Mr Gulen, who is living in exile in Pennsylvania, as well as with the Kurdistan Workers’ Party (PKK).

Mr Gulen has denied any involvement in the attempted coup. The European Union has said it does not share Turkey’s view that his network is a terror organisation.

Brunson’s lawyer Cem Halavurt confirmed Turkish state media reports that his client was being put under house arrest, telling AFP he would be moved from prison later Wednesday.

Live pictures broadcast by the NTV channel in the late afternoon showed Brunson being put into a vehicle outside prison and then driven away guided by a police motorbike escort.

The house arrest ruling was issued by a criminal court in the Izmir region where Brunson was being held. He has also been banned from leaving the country.

Brunson’s detention had become a symbol of the problematic relationship between NATO allies Turkey and the US, and news of his release into house arrest boosted the Turkish lira, which gained almost one percent in value against the dollar.

US Secretary of State Mike Pompeo on Wednesday welcomed the decision to move Brunson to house arrest, but said it was “not enough”.

Pompeo said “no credible evidence” had been presented against the pastor and called on Ankara to resolve the case in a “fair” way.